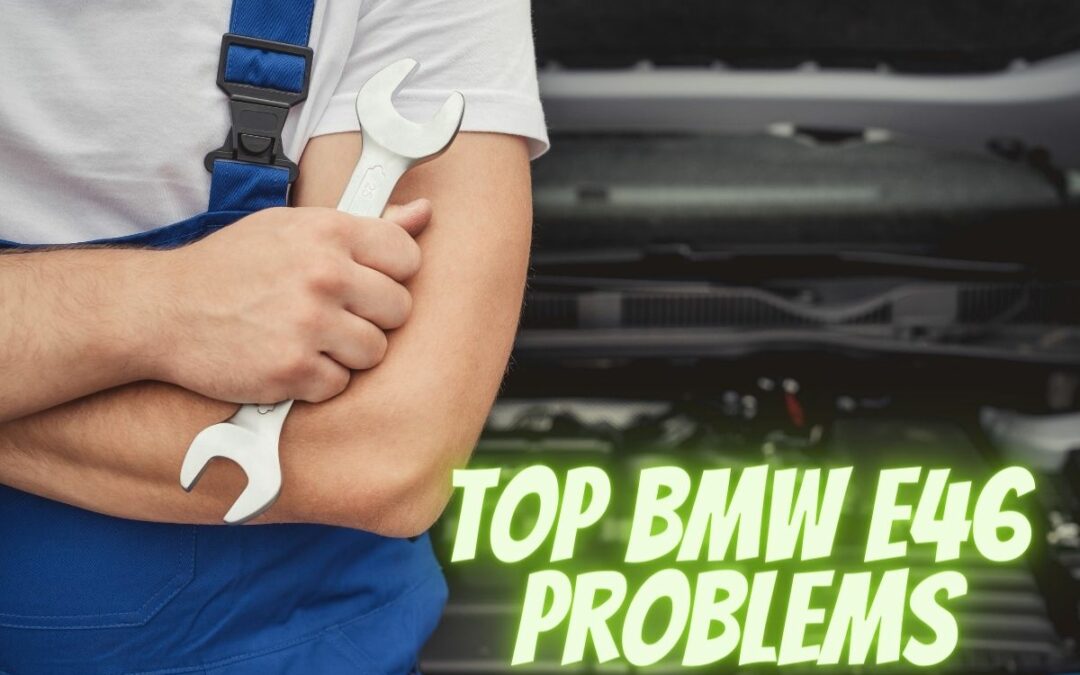 BMW E46 Common problems: Is a buyer’s guide really necessary for a vehicle that is over 16 years old? We believe you do. By today’s standards, the E46 3-Series is an outdated automobile, but it only goes to demonstrate how amazing these vehicles were. In terms of design, driving dynamics, and features, the E46 remains a strong rival. Not to mention the fantastic, unattainable inline 6-cylinder petrol engines. Although there are many E46s available today, it is difficult to locate one that is worth purchasing since they are pricey and justifiably so. These are the things to watch out for and the ones that, by the time the automobile reaches this age, should already be rectified.

One of the most typical problems with high mileage vehicles. These often stop working after 80 or 130 thousand kilometers. When driving over minor bumps or gravel roads, the steering will often rattle or clunk, which is one of the common symptoms. When it becomes a little worse, the steering will start to feel loose, and the vehicle will seem like it is navigating itself on bumpy roads and particularly in windy circumstances.

Lift one of the front wheels and see if you can move it back and forth to see whether your bushings are still in excellent shape. The play in the wheel is often just 10 to 20 mm, yet it significantly affects steering.

The solution is not the cheapest, but it is rather simple. The most common aftermarket components are made by Meyle and include a solid steel bushing since OEM lower control arms are notoriously troublesome (as opposed to the problematic rubber OEM one).

These are undoubtedly among the most prevalent problems, particularly with twin vanos versions (320i, 325i, 330i). Particularly in the lower RPM range, the symptoms are extremely visible. The engine will typically have an abrupt burst in power from approximately 3500RPM and above, with significantly poor torque and irregular power delivery below about 3000RPM. This is often accompanied by a slightly increased fuel usage (but not much higher), and on occasion, an erratic and harsh idle.

The remedy is not very simple unless you have any mechanical training. Online stores provide replacement seals, and because you must remove the valve cover to replace the vanos seals, it is better to replace it at the same time.

The problems with the gasoline pump may be a little less frequent, but they are a lot more annoying and possibly dangerous. Typically, they don’t go until they have traveled around 125 miles (200 km), but you’ll be alerted as soon as they do. A faulty fuel pump is often (but not always!) the cause of lean codes, if you’re paying attention to the output. One of the most obvious signs that something is wrong is when you run out of gas even if you still have roughly a quarter of a gallon left in the tank. This is a result of the gasoline not flowing throughout the tank and becoming caught in one side (I’m not sure which). The gasoline pump is located beneath the back seats, and I replaced mine myself a few years ago.
Turning the key two clicks to on position without starting is a great technique to check the pump. Your gasoline pump should start buzzing after around 3 to 5 seconds; this is entirely normal. Listen beneath the vehicle again if you don’t hear the buzz. But still nothing? You most likely have an issue.

Replacement pumps are readily available online, and with a little perseverance, they can often be installed in a few hours.

This is a rather straightforward problem, therefore there is often little need for concern. Your oil light will illuminate (YELLOW) when you first start the vehicle and will often go out after approximately 30 seconds. In this scenario, there is nothing to be concerned about.

In the event that the yellow light continues to flash, you should switch off the vehicle and check the oil level. If your level is normal, the sensor is probably malfunctioning.

If the indicator is RED, your engine should be examined if it keeps happening since sensor failure is very unusual in this case. Instead, it likely indicates an issue with your oil pressure, which we won’t cover here.

The sensor, which is at the base of the oil pan, is one that BMW adopted from the E36. A new OEM sensor may be purchased online or at a dealership (although it will cost more), and replacing it is likewise pretty easy and requires little effort (about an hour).

It is inevitable that the electronic window mechanism will break down after it has been used for a while, but the likelihood of this happening is directly proportional to the amount of time you spend opening and closing the windows. It is logical that they may break down after some weathering because the wire travels within a plastic track inside the pulley. The real glass may be a little loose as a consequence and may bounce forward or backward. The motors operating the window are subjected to a significantly larger strain as a result, and they will eventually burn out from repeated usage.

Although it requires opening the door and removing panels, fixing the mechanism isn’t too laborious. By searching for “window regulator repair kit” online, repair kits may be purchased for a reasonable price (but make sure the components you buy are of excellent quality!).

An overheating incident in one of these automobiles might have disastrous results due to the presence of aluminum in the cylinder head. Keep an eye out for any signs of a blown head gasket, since the whole head can spin, causing the same symptoms.

Several system components have the potential to malfunction, each producing a unique set of symptoms:
Thermostats are very inexpensive to replace, but if one fails, the engine may operate at a lower temperature or might never even reach normal operating temperature.

A water pump malfunction is more significant but yet reasonably simple to fix. When a water pump fails, the engine will often run hot and leak fluid (pay attention if you frequently need to fill filled with fluid). A whine coming from the engine compartment is another possibility, but there are many more possibilities as well.
After 90k miles/145k kilometers, expansion tanks will often fail owing to their low grade polymers and fatigue with temperature change.

In summary, you should definitely do some troubleshooting if you often need to refill your coolant in order to prevent more issues. Since each of these components is prone to failure, replacing the cooling system as a whole is far less expensive than having the cylinder head redone.

BMW E46 spares can be expensive, and that’s one reason why BMW scrap yards have proliferated in South Africa. If you’re driving a 3-Series, it’s important to be aware of the most common problems so you can take steps to avoid them or at least be prepared if they do occur. BMW’s are known for their quality, but even the best cars have issues from time to time. The good news is that with proper maintenance and care, your 3-Series will provide you with many years of driving enjoyment.

Have you had any E46 problems or have we missed anything? Let us know in the comments below!

We use cookies on our website to give you the most relevant experience by remembering your preferences and repeat visits. By clicking “Accept All”, you consent to the use of ALL the cookies. However, you may visit "Cookie Settings" to provide a controlled consent.
Cookie SettingsAccept All
Manage consent